The Journey of Little Charlie by Christopher Paul Curtis

My favorite book of all time is The Book Thief by Markus Zusak because it was the first book I'd ever read that gave the German perspective of the Nazis during WWII .  It opened my eyes and I connected very quickly with the idea that not everyone who lived in Germany (in fact a very small number of Germans) actually sympathized with the ideals of the Third Reich. 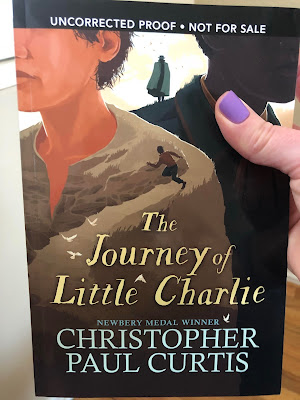 I know, it's a weird way to start a book review by talking about how much I loved another book...but stick with me.  Christopher Paul Curtis has done the same thing with The Journey of Little Charlie.  Told from the point of view of the not-so-little Little Charlie Bobo, this is the story of slave catchers in the 1850s who would travel north to try and recover escaped slaves.  The story opens with the sudden death of Little Charlie's father and the discovery that his father apparently owed money to a man named Cap'n Buck.  Cap'n Buck says that the only way Charlie can pay off his father's debt is by helping him recover "stolen property".  Little Charlie has never left his home of Possom Moan, South Carolina and though he's tall and looks like a full grown man, he's only 13. Along the way Little Charlie discovers the true character of Cap'n Buck and though he doubts he should be helping the Cap'n at all, he sees no other way proceed.
This would be a great book to use when teaching character evolution - the changes in Little Charlie are both obvious and inferred, which is perfect for upper elementary literary analysis.
I also learned to love the way the book was written.  Curtis writes it the way that Little Charlie would say it (much like the Aibileen Clark chapters from The Help). I struggled at first because I was reading it from a teacher's point of view and I wasn't sure how well students would be able to read it and understand what he was saying.  However, by the middle of the book, I was used to it and loved Little Charlie's voice, and I think students will too.  It would make a great read aloud if the reader was willing to get completely into it.
I would highly recommend this book to teachers and students and plan to give it to a student who loved Elijah of Buxton on Monday and see what she thinks of it.

Once again, thank you to Kristen Gilligan of the Tattered Cover for providing me with awesome ARCs to read and review.
Posted by Unknown

Feel free to add your opinion of this or any books you've read here. Proper APA citiation style preferred (ha!)