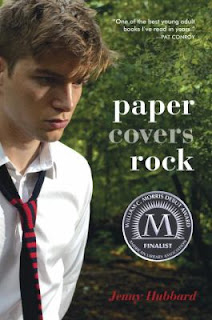 Most people think that I’m super smart because I’m a librarian.  Completely untrue.  I’m really not that smart, and in reading Paper Covers Rock, I realized that I know nothing about classic literature.  Nothing. Zip. The amount in my bank account. Nichts.
Paper Covers Rock is written in diary form, and it is the diary of Alex Stromm, a student at a boarding school in North Carolina.  One afternoon in the fall, he witnesses one of his best friends die in a terrible swimming accident.  In an attempt to deal come to terms with his grief and feelings of guilt, Alex starts keeping a journal; one that is partly reflective in nature and one that tells the story of what happened the day Thomas died.   What keeps the book moving is the fact that Alex isn’t exactly sure what happened that day at the rock – he knows that he, Thomas and their friend Glenn had been drinking, and Thomas had been drinking the most of all of them.  He knows that they decided to jump from the rock into the river, and that he and Thomas played Rock, Paper, Scissors to see who would jump first.  And he knows that when he surfaces from his dive, Thomas is unconscious, and shortly thereafter, he’s dead.  The school has a very strict no alcohol policy, so Glenn and Alex must cover up some of their story in order to stay in school, and Alex quickly begins to suspect that Glenn is trying to cover up more than just the incident on the rock.
So what does all of this have to do with classic literature?  Alex has a bit of a crush on one of his teachers, Miss Dovecott, and in trying to help Alex deal with his loss, she recommends that he read different classics: Moby Dick, the Old Man and the Sea, etc.,  and he weaves lots of literary references into his diary.  For example, he refers to himself as Is-Male (I got that one), and he asks Her-Mann lots of questions (got that one too), and apparently the title to each chapter is a quote from Moby Dick (missed that one).  While I was reading I could tell when the narrator was referencing something, but I rarely had the background knowledge to make the connection.
Regardless of being able to make connections, Hubbard did an amazing job of creating a realistic voice in Alex Stromm.  I don’t know for sure, because, well, I’m not and have never been a teenaged boy, but Alex’s guilt and uncertainty are absolutely real and palpable. And the ending is absolutely true to life.
I wouldn’t necessarily recommend this book for middle school or reluctant readers because of all the literary references (I’d call them obscure, but they probably aren’t).  However, I think that just about any high school student can relate to Alex because everyone, at some point, has to choose between seeing the truth even though it’s painful and difficult, or continue to turn a blind eye because it’s easier.  And everyone, at some point in their lives, goes through an event that will change their existence permanently.
Posted by Unknown No comments: 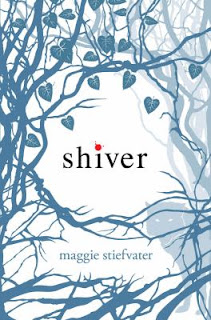 Two apologies to start off this review:

2.  Dear Maggie Stiefvater:  I'm sorry I read this book when I did.  I know you've written a great novel (er, trilogy), and I should have read this book years ago.  Any book that followed the high of Daughter was bound to get a meh reaction. That’s just the way things are. But I'm still a little sorry.

With Shiver Stiefvater has taken the “forbidden love” plotline and threw a big, rather hairy, wrench into it. Grace and Sam have always admired one another, but from afar.   Grace has always admired Sam from her kitchen window, and Sam admired Grace when she came into the bookstore where he worked during the summer.  So why don’t the two just talk to each other?  Because Sam isn’t a typical teenager: he’s a werewolf.  When the weather gets cold enough, he turns into a wolf and stays that way until the weather warms enough that he can turn back into a human.  In their small town of Mercy Falls, MN, there has been lots of wolf activity recently – a student was mauled and killed by the wolves.  When a hunting party shoots Sam, he is able to turn himself into a human and luckily Grace is there to save him.  Finally united in their human form, Sam and Grace make the best of the time they have together while trying to find a cure AND save the town from Jack, the oh-wait-he-didn’t-actually-die new werewolf in town.
Being a non-fan (antifan?) of the romance genre for the most part, I thought I was destined to dislike this book.  It sounded Jacob-gets-Bella-esque from the description, so I was leery.  However, the super creative twist (think Ladyhawke only sans Ferris Bueller, and for teenagers) made it completely readable to us Nicholas-Sparks-loathers.  I will say that the plot dragged a little for me, and there were times when Grace and Sam were gazing deep into one another’s eyes and I kind of hoped for a wolf to jump out and bite them, but again, I blame the timing.  I’m pretty sure if I’d read this book in the fall, or even six months from now, things would be different.  But I digress.  In general, it was a pretty good read.  I can absolutely see the teen attraction, and the last chapter or so hooked me.  I would love to say I’m going to read the rest of the trilogy: Linger and Forever, but unfortunately, I just don’t have time.  The pile of books-to-be-read grows daily, so I rarely read sequels (Laini Taylor, if you’re reading this, that sentence does NOT apply to your books.  Just sayin).
Regardless of whether or not I find out what happens to Grace, Sam, and all the other great characters from Mercy Falls, I would highly recommend (and already have, twice) this book to just about any teenage girl who loved Twilight.

Books, Steampunk and Bonding with Students

I don't usually blog about what I do every day in the library because non-library people would probably find it pretty boring.  I read*.  Books, book reviews, magazine articles about books, books about books, etc.  And I talk about books - with teachers, students, and other library geeks.  I do book talks, genre walks, book recommendations, etc.  At least once a day I go gaga crazy over a book.  Usually, it's when a student comes in looking for a book and I get to help them find one that's AMAZING and that they cannot possibly live without reading it!!!  And yes, most of the students and staff here think I'm a little off my rocker.  They're probably right, but I'm charming and cute, so they let it go.
The teacher part of me has not died in becoming a librarian.  One of the biggest perks of being a teacher is watching young minds grow, change and develop into thinking (albeit hormonal, slightly imbalanced, but darn funny) minds.  The thing I miss the most about being in the classroom is the opportunity to get to know students - their lives, their strengths, their struggles, and their passions.  As a classroom teacher I really got to know the kids in my classes, but I never really learned much about the students who didn't take German.  As a librarian, I learn lots of names but I don't have as much of an opportunity to get to know kids on an individual basis.  Except for two types of kids:  the book lovers and the punks.  I know the punks because I have to talk to them every time they come into the library about one of the following things:  drawing on the desks/walls/bookshelves, horseplay, trying to check their facebook status, swearing, or being punks.  I had to deal with the punks as a classroom teacher as well, so it's par for the course.  And usually, I can find one or two redeeming qualities to the punks, so they aren't that bad.
However, it's the book lovers that make my job a joy each and every day.
Take, for instance, the three girls who come in and have lunch with me every day.  They love books just about as much as I do and we banter about books constantly.  If I read a book that I know one of them will enjoy, I give it to them.  One of them constantly tries to convince me that there is literary value to Nicholas Sparks novels (professionally, I know she's right, but personally...gag me). Another devours every book i give her within 24 hours and always give an honest opinion about books (last week: "Only babies would like that book Miss C...what were you thinking?").  Those girls make my day each and every day - even on days when they're hyper and loud.
This morning I visited some 6th grade classes and talked about different book awards, the awards process, and the award winners we have in the library.  As I was getting ready to leave, a boy caught my attention: "Miss C...look!!" I turned, and in his hands he held the perfect Steampunk tophat and goggles.  I melted.  This kid knows I LOVE Steampunk (if you don't know what Steampunk is, think Will Smith's Wild Wild West.  It's technology + historical fiction = pure awesomeness), and now we're permanently bonded through the love of a genre. 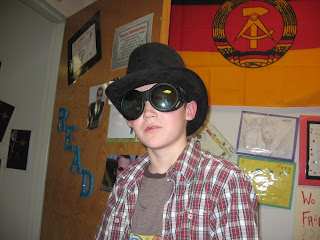 I don't know where life will take him, who he'll turn out to be, or what books he'll love as an adult, but I do know that we've bonded because of books.
Some people are super stoked for this weekend because of the Super Bowl, and that's great for them.  I am super stoked because sweet Abram brought his rockin' cool hat and goggles in to show them to ME today.  That?  Makes me pretty freakin' cool.

*Update: I also spend quite a bit of my day focused on technology - fixing it, teaching it, figuring it out.  I'm as much tech-guru as book-guru.  Beloved library friends, please stop the influx of emails about "don't you work with technology?" and "gosh, I wish I had time for books - I'm too busy with technology".  Books are just the focus today.  For the record, I heart tech too.
Posted by Unknown 4 comments: