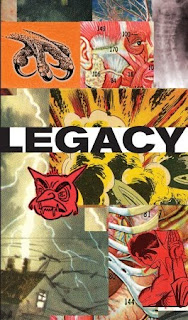 Can you imagine what it would be like to have Superman as a dad?  Pretty sweet right?  Not for Lucas - a high school drop out who has grown up in a trailer park with his mom knowing nothing of his deadbeat dad.  Turns out his dad is the Raptor - a studly superhero searching for someone to carry on his superhero legacy after he's gone.  But will being a superhero/billionaire negate eighteen years of neglect?  And would you want to go from leading a normal life to being a superhero just because of your genes?

Released last fall, Legacy is an excellent young adult novel about handling the cards fate deals out.  Sniegoski takes something that should be an awesome turn in your life - going from a trailer park to a mansion overnight - under the 'reality' light.  Lucas is a typical teenaged boy in many ways:  he's loyal to the mother who raised him, angry at the father who abandoned him but curious about his fathers dual life, and kind of stoked about the whole 'superhero' thing.  When Lucas finds out that evil takes all forms and must deal with his mother's brutal murder, he grows up quickly.  This is a lesson that many of our teens have to deal with much sooner than we'd like them to.

I'm one of the very lucky people on this planet who has parents who really are superheros - they've been married for almost 40 years and they still flirt (gag) with each other.  They dedicated their lives to making sure I had the best life I could have and I'm so thankful for them.  But for those who haven't been so blessed, this book is a great example of becoming all that you can be despite your parents mistakes.
Posted by Unknown No comments: