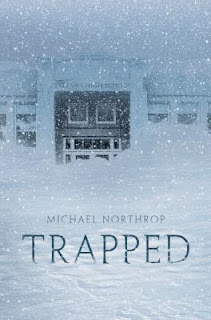 It’s winter, it’s cold, and it snows.  Luckily where I live, it doesn’t snow too much (yes, I live in Colorado, but newsflash, the western side of Colorado is the desert), so we rarely get snow days (darn).  When I lived in Chicago I always hoped for snow days, but in the four years I lived there, it just never happened. As a teacher, I love snow days.  It’s the greatest feeling in the world – wake up, start getting ready for school and ring ring YES no school!  I’ve never thought about the fact that a snow day could be bad.
Then I read Trapped by Michael Northrup and I realized a snow day could be bad. Especially if it meant I’d be stuck at school on a snow day.
Trapped takes place in New England – a place where monster snow storms are more common.  And the storm that takes place in this book is the big one – the perfect snowstorm. The book starts out and it’s a regular day with snow expected.  When the snow starts to fall harder and sooner than expected, school is released a little early so the students can get home.  Of course, a few students and a teacher stay late – grading papers, working on projects, etc.  By the time they decide to leave a few hours later, the snow is so bad, cars are no longer driving on the road and it looks like they’ll be stuck overnight. The next morning they wake up and it’s still snowing and it doesn’t look like it’s going to stop.  They realize that no one is going to be coming for them anytime soon, so they make themselves comfortable – they raid the cafeteria for food and try to make the best of it.  But when day three and four pass and the snow hasn’t stopped, no power and no sign of help coming, things get interesting.
I enjoyed the premise of the book, and I really enjoyed that it was told from a student’s point of view – for the first day or so, they aren’t worried because they’re at the age where they still rely on adults to take care of them.  Once there are no adults to make the decisions, things get a little tricky.  The characters are relatively true to “typical teenagers” – though I must say, they were pretty tame for teenagers.  I liked this book, but it wasn’t really a page turner, and my reliable student reader Anna called it “a little kid-ish”.  It has action, it has suspense, but it’s just a little…vanilla.  Having said that, I liked that it wasn’t over-sensationalized – it’s definitely realistic fiction.
Though it didn’t make my top ten list of greatest books ever written in the history of the world, I would recommend it to some of the readers I have who don’t like fiction because it’s “fake”.  I think those readers who enjoy reading books that are realistic and not dramatized at all would enjoy a book like this.
Posted by Unknown No comments:

Scarlet Moon and the Once Upon a Time Series 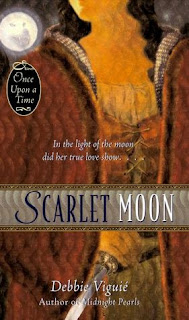 Fairytales will always have a special place in my heart.  When I was a girl, I loved fairytales because of the knight in shining armor.  When I was a teenager, I loved fairytales because they made me feel nostalgic (I know, nostalgia as a teenager?  But think about it, childhood stories would be something we had shed by that age and could look back on with fond memories).  In college, I was able to see and appreciate the strength the female characters possessed in fairytales.  Now as an adult, I have loved reading fairytales to my nieces because I get to re-experience the stories through their eyes.
Last year I discovered the Once Upon a Time series, and I was hooked.  The series takes all of our favorite fairytales and retells them with historical twists.  Scarlet Moon is the retelling of Little Red Riding Hood.  Only in this story, the grandmother lives in the woods because she has been banished from the village for being a “witch”, and Ruth (Little Red Riding Hood) is first attacked by the wolf when she is young because her red cloak attracts his attention.  She survives the attack as a child because her brother stabs the wolf.  Then her brother must go off to fight in the Crusades, and Ruth spends the next nine years helping her father in his blacksmith shop.  As a young woman, she meets the mysterious nobleman William enters her life, she can’t help but fall for him – he’s the only man who not only accepts that she is a woman doing a man’s work, he is attracted to her because of it.  One problem:  William has a very dark secret.  His family was cursed generations before, and, well, he’s a werewolf.
Yep, you guessed it.  He’s the wolf that attacked Ruth so many years before.  And now she has the hots for him and he has the hots for her.  It’s twisted and awesome and I couldn’t put it down.
What I love about Scarlet Moon and all the books in the Once Upon a Time series is that the twist they put on each of the fairytales has to do with different historical periods, making them almost historical fiction.  Scarlet Moon is just as much about the Crusades and how difficult they were on families as it is about werewolves and witches.  Crimson Thread, the retelling of Rumpelstiltskin, tells the story of American immigrants at the turn of the century.  What a great way for girls to learn history!
So obviously I’m completely in love with this series.  Scarlet Moon is one of my favorites, and I’ve read about 8 of the series.  Yes the series is a bit older, but it is TOTALLY worth reading, regardless of age.  The books are written at about a 6th grade level, so if you have young daughters, they are great books to read with them before bedtime.  If you have sons, yeah…you’re going to want to find a different series.  These books are all girl.  I would highly recommend these books to any female who has fond memories of fairytales.
Posted by Unknown No comments:

A Monster Calls by Patrick Ness 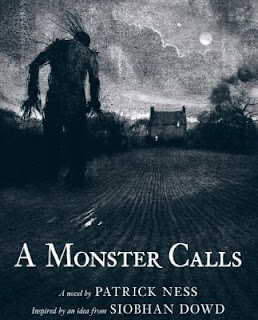 First off, let me say that usually, I don’t do scary.  I’m the girl that has night terrors and is truly afraid of things that go bump in the night.  When I do read scary books, I usually only read them during daylight hours, and they usually have a pretty profound effect on me – especially on my ability to sleep.  When A Monster Calls came across my desk, I knew the book would have an effect on me, I just didn’t realize how much of an effect.  And…spoiler alert…it’s actually NOT scary.
A Monster Calls is about Connor, whose father has moved to America and has a whole new family, whose grandmother is hard-working and pretty cold toward him, and whose mother is battling cancer.  Connor has suffered from a terrible nightmare for months – his mother falling off a cliff being consumed by a monster.  When another monster appears at his window one night, he isn’t scared.  This monster has not come for his mother, it’s come for him.  The monster will tell Connor three tales, and then Connor must tell him a tale – the only truth Connor knows.  But Connor isn’t sure he can tell the only truth he knows.
Throughout the book Connor tries to convince himself that the monster is just a dream – I mean really, it’s a talking tree!  But as his mother gets worse, and things at school get worse, the monster continues to visit him, tell him stories and have a profound effect on him.
I don’t want to tell you much about the book, because I think part of the reason it affected me as much as it did is because I didn’t know much about the storyline.  I will say that the book really isn’t about monsters.  It’s about coping with grief and loss.  Patrick Ness has done a superb job of creating a new way of viewing the human condition and what is “unfair” in life.
What I will tell you about the book is that while it was written by Ness, the idea came from another great writer – Siobhan Dowd. She has written several excellent novels which I can’t keep on my shelf, and in 2007 she lost her battle with breast cancer.  Last night as I finished the book, I couldn’t help but think about her and her battle.  Did this idea come from her difficulty in dealing with her mortality?  I also kept thinking about a conversation I recently had with my dear friend Katy– is it easier to deal with loss when it’s sudden or when it is a slow process?  In the end, we realized that loss is difficult regardless of when and how it happens, but the most important part of loss is dealing with it.  I hope I never have to deal with loss similar to Connor’s (I’m hoping beyond all hope that my parents are actually immortal…), I’ve learned a lesson from Connor’s story – speaking the truth is the only way to truly deal with loss.
I would recommend this book to just about anyone – unless they’re looking for a traditional “horror” book.  The illustrations (by Jim Kay) are haunting, but the book really isn’t about monsters in the traditional sense.  This book really is about as close to realistic fiction without actually being realistic fiction as humanly possible.  This book is heart-wrenching, deep and thoughtful.  So if you’re looking for funny, don’t pick this one up.  But if you want a book that will make you think about truth, the human condition and the tough stuff in life, I highly, highly recommend this book.  And yes, I cried (shocker).
Here's an article/review written by Jessica Bruder, a woman who knew Dowd well: It Takes a Monster to Learn How to Grieve

Another great review from Stackedbooks.org


Here's a link to Siobhan Dowd's website The Siobhan Dowd Trust
Posted by Unknown No comments:

Thank you to Nancy Dowd of The "M" Word - Marketing Libraries for sharing this awesome video!

Posted by Unknown No comments: